A call to pray and fast for Syria

There is much concern about the future of Syria.  Christians in the Middle East, US and Europe are calling on people to fast and pray for Syria at this critical time March 1-3 2019.

There is still plenty of turmoil as Turkey, Russia, Iran, and the Assad regime plot on ways to take Northeastern Syria for themselves and crush its nascent democracy and religious freedoms.  It's the only area in the region where people can freely choose to follow Christ and worship without persecution.

ISIS will try to regroup and strike back as is already happening in Iraq. Even today, it was disclosed that new levels of horror are emerging with the discovery of at least 50 severed heads of Yazidi women believed to have been held as sex slaves by ISIS.

It remains critical to encourage US authorities and others to make decisions that lead to long term stability for the region and for Syria, particularly the Northeast where so many have died and suffered for opposing ISIS and its ideology.

God can move mountains and right now we need him to display his “handiwork” in human history (Isaiah 19:23-25).
​
Thanks and blessings. 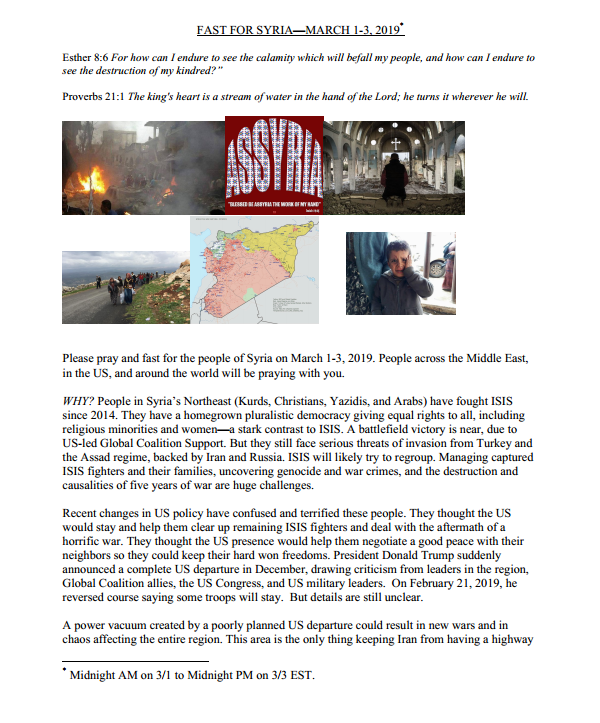 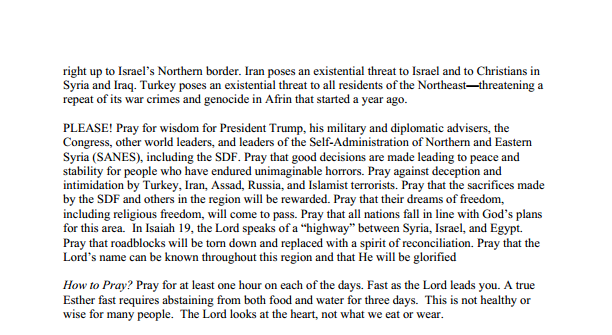 INFORM YOURSELVES ON THE AREA AND ISSUES: Read or watch using the links below:
VIDEO SUMMARY
Letter of the International Religious Freedom Roundtable to President Trump dated January 9, 2019 with appeals from Christians and Yazidis and maps.
Jerusalem Dateline: 2/1/19 Exclusive: Christians in NE Syria Warn of Genocide and follow on videos:
A New Democratic Government Emerges Out of Syria – But Will it Last?
The 700 Club - February 20, 2019
Respected NGO Genocide Watch issues genocide warning if Turkey invades the NE